of Bioacoustics and Animal Behavior at Saint Mary's College

Saint Mary’s has provided some once in a lifetime opportunities for me, as well as other fortunate students. I cannot express the gratitude enough for these opportunities. The most prevelant would have to be this research trip. Not only do we as students have such opportunities, our professors do as well. Dr. Kloepper was invited to an inclusive seminar and had to decide what to do with her two students…

She reached out to our Alumna network and they offered to be hosts while she was away. Cassi and I were excited to hear of the energetic replies of the Alumna to host a few current SMC students. We met an Alumnae, Erin Reilly Stroka, and her wonderful, generous family. I cannot say positively who was more excited to stay with other another smick chick! It was awesome to hear of all her memories from Saint Mary’s, and update her on what is going on currently at campus.
Her family and herself showed Cassi and me the iconic towns and cities of New Mexico. Not to mention, they also took us to lunch for our last New Mexican based meal. We visited one of the oldest Roman Catholic Churches, El Santaurio de Chimayo which is also a National historic landmark. It was remarkable to see all the culture that has been kept as pristine as possible, and to learn about some of the south west United States culture. They also took us on a tour of old town Santa Fe, NM which is a must do if you visit New Mexico! There was some kind of festival about to begin and lots of vendors selling lots of products of all kinds. On top of this, they had an amazing backyard with a pool and a hot tub. The pool was a slice of heaven in the southwestern climate!

They spoiled us with great food! Breakfast, lunch and dinner…even better by topping it all off with cake and cookie dough dessert!
Erin informed Cassi and me that she was so excited for her daughter to head off to school, and as college students we tried our best to pass off some knowledge for the incoming freshman. Lindsay you’ll do great and create even greater memories!! I admire the relationship you and your mother share! 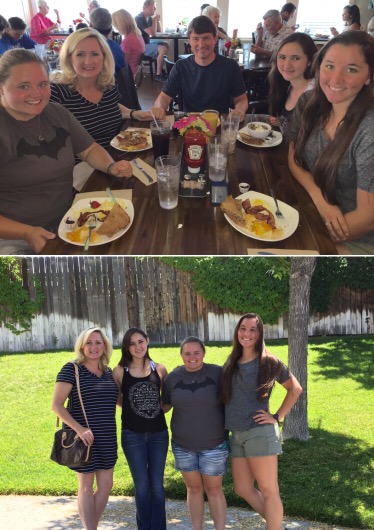 They also had two adorable pups to entertain us! Kelsie, a border collie, seemed to never tire of chasing the tennis ball whereas Scarlet, a yorkiepoo, was always content to snuggle.

We only had two short days with Erin and her family, but it’s that graciousness, welcoming persona of a smick chick that makes me proud to say that I too, am Saint Mary’s. Again, thank you Erin, Eric, and Lindsay for the unforgettable weekend!