of Bioacoustics and Animal Behavior at Saint Mary's College

We left Oklahoma at promptly 8 am after we finished packing up our tents. It was a 7 hour drive, but turned into 8 due to the stops for coffee and the restroom. On the way to our next stop we drove through Texas and New Mexico!

Only one bird flew into our windshield during this travel! And no other animals were harmed in this travel. Earlier this morning Dr. Kloepper told us we had a surprise and asked if we wanted to know, but of course we said we didn’t. Once we arrived to the hotel we finally got to take a real shower after 4 long days. It was the best shower I’ve ever taken and it felt amazing. Dr. Kloepper’s mom walked in shortly after we all got clean (including Kaipo). She is the sweetest woman! She brought us each a goody bag filled with little things we can do on the trip! She also packed a communal bag with a bunch of different snacks and a goodie bag for her grandson Kaipo! (I had to include that because she hates being called grandma. She says she doesn’t have grandkids yet so now it’s fun to say it. She secretly loves Kaipo as a grandson I’m sure!)

Now it is 5:30 and we are all dressed and ready to leave the hotel to head to our surprise. We had to dress kind of nice, but also being a sweater or cardigan. Dr. Kloepper, Steph and I all wore the same color top and it was not planned at all. Dr. Kloepper said if her mom walked in with a matching shirt we were heading home! It was great. We still had no idea what our surprise was at this point.

We began driving toward the mountain and it wasn’t until I spotted it that I knew exactly what we were doing. 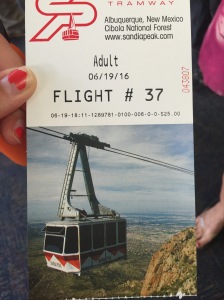 We were taking this tram up trough the mountainous terrain to a restaurant atop the mountains. Now the view driving was absolutely stunning.

But the view in the tram was phenomenal. The pictures do not do it justice. But to be nice I’ll share some just so you have an idea of the amazing experience Steph and I had! 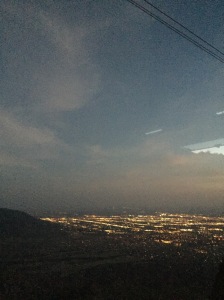 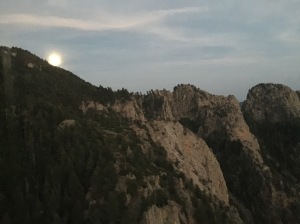 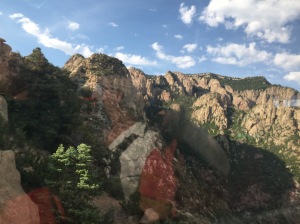 It was just something that words can’t even explain. However, Steph mentioned it reminds her of China in the movies..aka Kung fu panda! So if you’ve seen that then I guess you’re closer to our experience than most others would be! Now our night isn’t even over! When we got to the top we looked around at the view that was breathtaking, but then we had dinner. In the middle of the mountains we had dinner! It was the best surprise ever. The food was delicious. Definitely not like canned food.

After dinner we got to watch the sunset behind the mountains. It was stunning.

The night was coming to a close and back at the hotel Steph and I were in bed and I passed out immediately!

Now today we get to explore old town Albuquerque! Then we leave after lunch to our next cave stop! Hope you all enjoyed reading as much as I enjoyed the surprise!